TVAS South West have been excavating at Slate Lane Quarry, West Camel. The excavation has revealed a number of interesting features dating to the Iron Age and Roman period.

Slate Lane Quarry is situated close to two scheduled monuments (a late Roman building made of stone with a cremation and the shrunken Medieval Village of Downhead) as well as other Roman and Iron Age settlements. A geophysical survey and trial trenching evaluation took place which confirmed the site’s high archaeological potential.

Phase 1 excavations revealed five extensive rock cut features, all likely to be multi-phased quarry pits. Four pits containing very few finds and all with a similar deposit suggests the beginning of the extraction of lias stone during the Roman period. 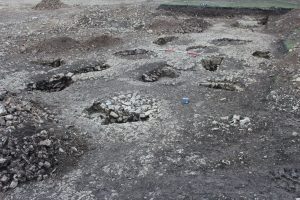 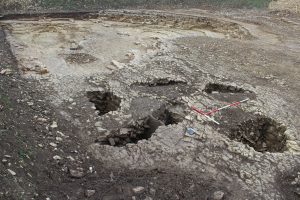 Above left and right: the pit clusters at Slate Lane

The fifth and largest feature measured 25x15m in plan. It had a distinctively different fill consisting of a rich organic deposit with a sizable pottery assemblage and frequent animal bone. The pottery is most certainly Roman in date.

A hand excavated sondage revealed three more deposits and further pits and postholes. After the uppermost deposit was removed a ring gully and at least two rectangular post built structures of either Late Iron Age or Roman date. These are likely to be a round house and possible granaries, respectively.

At least 20 pits were found to the east and to the north. The eastern pits were arranged in neat clusters, one comprising 6 and the other 11 pits. Two pits in each cluster were likely to be dug at the same time with a certainly deliberately placed stone division added at a later date. 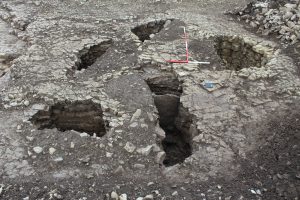 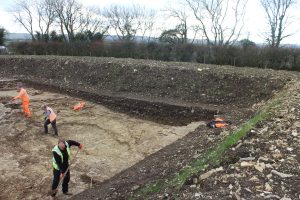 This large and irregular “rock-cut” feature is most likely the result of stone extraction that was later used for domestic occupation. More precise dates are yet to be confirmed, however, given the types of features (the round house) and the pottery from the lowest levels it would suggest an Iron Age date.

A more in depth analysis of the findings will be written in a full report to be published soon.