Providing archaeological solutions for both planning and research

TVAS have mounted several displays and exhibitions designed to share our findings from the sites that we excavate. On several occasions, these have contained informative posters which we can now freely make available for download. Below is a list of sites for which material is available with links to download in PDF format.

After an archaeological evaluation in 2016, TVAS conducted a full scale excavation at Butts Piece, Stanton Harcourt. The site was densely populated with a variety of archaeological features including large Iron Age pits, Roman enclosure ditches and at least 14 Anlgo-Saxon post built buildings. An open day was held on 5th September 2021 as part of TVAS's public outreach initiatives, which proved very succesful. A site plan and five A1 sized posters were produced to provide further information about the site, its context and assemblage, these are available to download as PDFs below:

In 2021, TVAS undertook an excavation just outside the village of Lenham, Kent. A range of finds and features dating from the Mesolithic through to the Anglo-Saxon period were found. In August, the team was invited to the Glebe Pond open day to show the public some of the finds and provide further information on the site. Five A1 sized posters were produced to provide further information about the site, its context and assemblage, these are available to download as PDFs below:

TVAS have been excavating the remains of a late Roman Villa in Cam. This Villa has produced a a significant quantity of important finds from a hypocaust system with many of the internal pillars intact, to large amounts of painted wall plaster. The Roman Villa, while important, is not the only interesting part of the site. A Bronze Age roundhouse was uncovered as well a series of other features such as ovens. Five A1 sized Posters were produced to provide further information about the site and assemblage, these are available to be downloaded as PDFs below:

TVAS undertook a large multi-area excavation in advance of housing development at Hatch Farm, Winnsersh, on the southern edge of Reading in 2016. The work, commissioned by Armour Heritage on behalf of Bovis Homes and Persimmon Homes, uncovered field systems and a farmstead of late Iron Age date. An open day was held in order to give the public an opportunity to see the site and some of the finds recovered from the excavations. Two A1-sized information posters were produced to provide further information about the site and its context, these are available to download as PDFs below:

A particularly full site, new to TVAS East Midlands in 2019, the excavations at Main street, Witchford have provided an opportunity to explore the extent of settlement in the area. A range if features were excavated including evidence of roundhouses and enclosures. As part of TVAS East Midlands' public outreach initiatives, an open day was held on the 27th of October, and proved to be very successful. Two A1 Sized information posters were produced to provide further information about the site and assemblage, these are available to download as PDFs below: 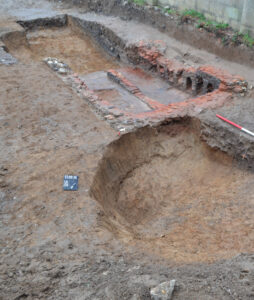 A particularly exciting site, new to TVAS in 2019, the excavations at Silver Street have provided a unique opportunity to explore the history of Reading town. Two tile kilns uncovered during the extensive investigation are thought to date between AD 1250- 1500; and are presumably remnants of a Medieval tile production industry known to be in the local area. As part of TVAS' public outreach initiatives, an open day was held on the 17th of March, and proved to be very successful. Two A1 Sized information posters were produced to provide further information about the site and assemblage, these are available to download as PDFs below:

One of TVAS' larger projects of 2018 was to excavate two areas close to the remains of the medieval Barking Abbey. Previous work on the site had revealed the possible remains of an earlier Anglo-Saxon abbey as well as further components of the medieval complex. Open days for schools and the general public were held in June 2018 to share the results of the first excavation area. Four A1-sized posters were produced in addition to an A3 site plan. These are available to download as PDFs below:

In late 2017 and early 2018 TVAS undertook an open area excavation within the village of Tackley in nortern Oxfordshire. Previous trenching had identified the presence of a Roman structure and the excavation was able to uncover a large portion of what appears to be a villa complex. An open day was arranged for late March 2018 to present the findings to date. The 3 A1 posters which were produced for this are available as PDFs to download below:

TVAS excavated an area of land next to the known site of a medieval and post-medieval manor house. The archaeologists revealed a series of garden features associated with the houses and numerous medieval pits and ditches. An open day was held on the site in March 2013 to present our findings to the local community. Three posters were created with information on the excavations, the manor house and the other features. These are available below to download as A1 PDFs:

Background information on the site and the manor houses (6.34MB)

Information on the previous archaeological work carried out in the area (3.04MB)

An area of land was excavated by TVAS north of the village of West Meon in advance of the construction of a housing development. The excavations uncovered a 29m-diameter Bronze Age ring ditch and 49 Saxon graves, both adults and children. An open day was held on the site in November 2011 to present our findings to the local community. Two posters were created with information on the excavations, the ring ditch and the cemetery. These are available below to download as A1 PDFs:

Information about the cemetery detailing two burials in particular (9.36MB)

Between June and July 2011 archaeological fieldwork took place prior to the development of the site for new houses. The excavations uncovered a variety of features that are fairly typical of the 'backlands' of a medieval settlement. These included evidence for the division of the land, rubbish disposal and animal management. A site open day was held to share the archaeological findings with the local community. The posters created for this are available as A1 PDFs below:

History of Haddenham and the Archaeological Evaluation (5.21MB)

Background to the current fieldwork and the Desktop Study (3.01MB)

Excavations in advance of gravel extraction at Plumley Wood Quarry revealed an extensive Roman pottery industry. An open day was held mid-way through the excavations for the local archaeological society for which a display poster was created:

The Church of the Immaculate Conception, Bicester

During the construction of new parish rooms in November 2010 TVAS discovered a tightly-packed Anglo-Saxon burial cemetery. Three of excavated skeletons were put on display inside the church for a media event attended by TV and newspapers as well as the local historical society. A poster was designed to provide background information on the site, the excavations and their findings. An A1-sized PDF version of the poster is available below for download:

Excavations at the Church of the Immaculate Conception (4.41MB)

In October 2010, to celebrate the opening of the new Kendrew Quadrangle buildings, TVAS were asked to create an exhibition detailing the finds of the Elizabeth House excavations, in particular the Viking mass grave. A series of eleven posters were created to tell the story of the site from the Neolithic henge through to the Post-Medieval farm. These are all available to download at their original A1 size:

Kendrew Quadrangle Monuments, Murder and Farming - A summary of the excavations (6.58MB)