TVAS East Midlands have recently finished their excavation at Dunton Lane, Biggleswade. Here is a summary of their findings with a full report to follow soon. 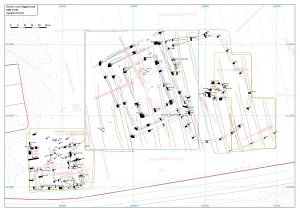 Above: plan of the excavation area

The site is situated within a rich archaeological landscape; with a wide range of sites of many periods in the surrounding areas and several settlement complexes recorded. A 73 trench evaluation, undertaken in September 2021, identified a variety of archaeological features that also confirmed the findings from an earlier geophysical survey. From the evaluation two areas were opened for full excavation. 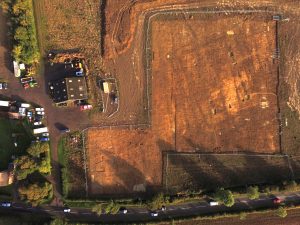 Above: the site as seen from above

The area to the south west of the Roman triple ditch enclosure produced a Medieval trackway and quarry pits dating to 12th-14th centuries. A Late Medieval gravel surface was also excavated; this may be a predecessor to the current Dunton Lane which has early origins.

Overall, the site produced a large assemblage of Roman pottery and three distinct areas of occupation. The post excavation analysis is currently ongoing with a full report to follow soon.