After 8 months the excavations at Tanyard Farm, Old Ashford Road, Lenham have finished. The site produced evidence of human occupation from the Mesolithic through to the Anglo-Saxon period. Here is a brief summary of the finds.. 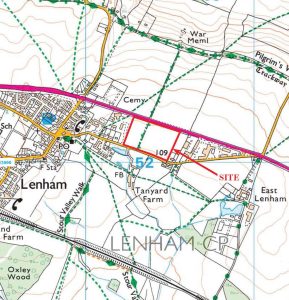 Above: Map showing the site and surrounding area.

The earliest features identified are a series of pits that have been dated to the Mesolithic. These pits contained a variety of flint tools synonymous with the Mesolithic including microliths, blades and adzes/axes. Mesolithic features are extremely rare due to the nature of the hunter-gatherer, nomadic lifestyles therefore this is an incredibly exciting find. 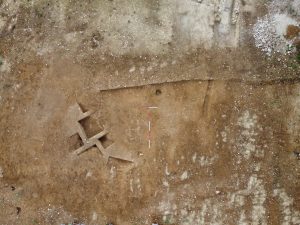 A multi-phase Late Neolithic to early Bronze Age barrow represents the next phase of Lenham’s occupation. At the centre of the barrow was a beautifully preserved Beaker burial. A small urn cemetery was also discovered surrounding the barrow. 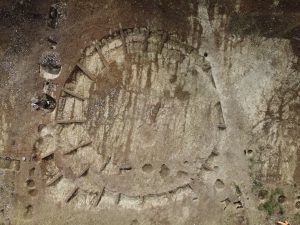 Above: The Bronze Age barrow seen from above.

There was limited evidence for the Iron Age on site, however, three high status cremation burials were discovered. These burials contained 12 complete vessels imported from the continent, copper brooches, a large iron cauldron and the remains of food offerings. 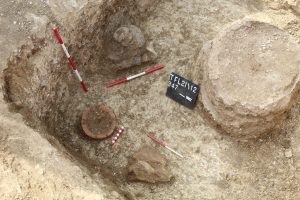 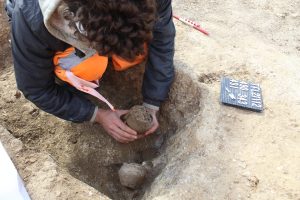 Above left: Pit containing a cauldron and other vessels. Above right: Lifting a small vessel from a pit

During the Roman period, Lenham sees the beginning of industry. A surfaced track-way, enclosure ditch and permanent metal working area show the subdivision and repurposing of land. The metal working area produced the most finds from the excavation with over 800 catalogued pieces of metalwork, not including the exciting discovery of 3 metal vessels and a scattered hoard, made up of 3rd century coins, 2 rings and a bracelet.. 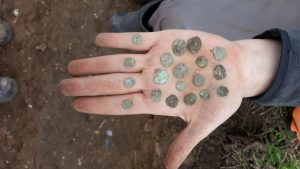 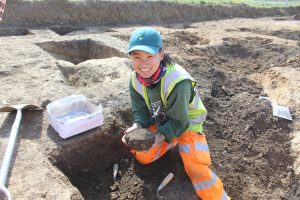 Above left: A series of coins that formed part of a scattered hoard. Above right: Lifting a metal vessel

A 37 metre long (post-built) early Saxon building was excavated. This building also had a surviving cobbled yard surface running along its southern side. The exceptional size of the building means it is possibly the largest found in the UK so far. 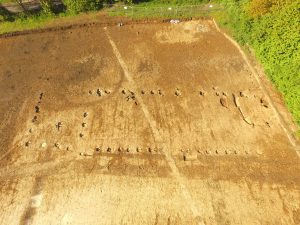 Above: The Saxon building seen from above.

The results of the excavations have shown this area of Lenham has had a surprisingly consistent sequence of occupation, which we believe is in part due to the proximity to the natural spring which is now Glebe Pond. The team also had a stall at the Glebe Pond open day displaying a series of posters about the excavations. These can be found on the resources page.

The post excavation process is currently underway which will culminate in a published report once all the evidence has been fully analysed.