Excavations at Tubney have been ongoing for several years. Previous phases of excavation revealed very little archaeology. That all changed with the latest phase. The features that were uncovered at the crest of a slope on the site show a Roman ladder settlement. 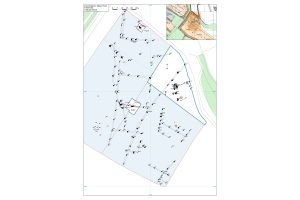 Above: Plan of the settlement.

The settlement included several boundary ditches, creating the distinctive shape, multiple pits running down the slope, and a series of three wells.

The wells possibly form a sequence across the site from its initial construction to final abandonment. The first of the wells was shallower and was further down the slope. This well showed no stone lining and was eventually surrounded by rubbish pits. The other two wells showed stone lining. The Northernmost of the two had the first two metres of its stone removed and was backfilled at some stage. It is possible that the stone was removed to aid in the construction fo the third well. The third well showed a clear stone lining and the surrounding construction packing layers allowing an insight into the method of construction. 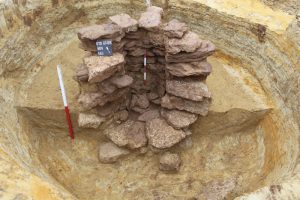 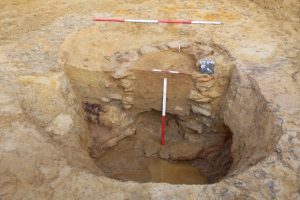 Above left: A well in the process of excvation. Above right: The second stone lined well.

The finds from the rubbish pits and ditches included multiple different types of roman vessel from Samian down to local cooking vessels. The diverse range of vessels should allow for secure dating of the features, that produced the pottery, allowing for the site to be phased clearly.

Along with the pottery other finds were recovered. The most impressive of these being an antler pick which has clear evidence of being worked into shape. 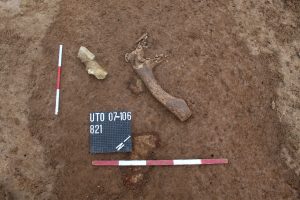 The post excavation process, including specialist reporting, is currently being undertaken and the report will be fully prepared in due course.