Excavations at the quarry have been undertaken over many years by TVAS, recording a wide range of features and finds from the Bronze Age to Roman. The latest phase of excavations is no exception. They have revealed further Iron Age and Roman systems of ditches and enclosure as well as a series of pits and a post built roundhouse.

Perhaps the highlight though is the finding of two ovens or furnaces cut by a later ditch. From one of these ovens and the ditch was recovered multiple fragments of small of a number of coin pellet moulds. 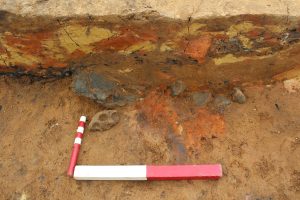 These moulds consist of a ceramic disc each with eight roughly uniform indentations and would have been used in the production of coinage.

Current theory as to there use is that un-melted metal fragments were placed into the indentations. The tray is then heated using a furnace or oven and the metal fragments forms a pellet that can be removed from the mould and then be stamped into coins. These coin pellet moulds likely date to the late Iron Age or early Roman periods and are evidence of possible small scale production of coinage. 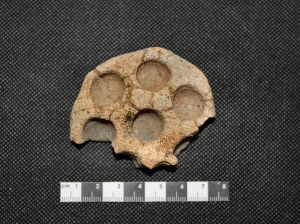 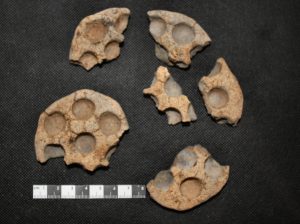 Above left: A single mould. Above right: The moulds as a group.