Since October 2020 excavations have been taking place at a site in Greenham. Initially only a moderate amount of archaeological features was expected but, upon stripping and cleaning the site revealed a wealth of features.

Several large enclosure ditches, some as deep as 1.7m were uncovered across the site. Within, and around, these enclosures a vast amount of postholes were uncovered. Many of these pits and postholes contained pottery of Bronze Age and Early Iron Age date showing an extensive and continuous occupation throughout the period.

The prehistoric features are not the only discoveries on the site. There are also ditches that contain Medieval pottery. One of these has postholes lining the sides which suggest a fence line to divide the area. The shallow remains of furrows can also be seen on the site. While these aren’t dated their direction suggests that they may be associated with the medieval ditches. The church near the site way well be connected to the medieval ditches. 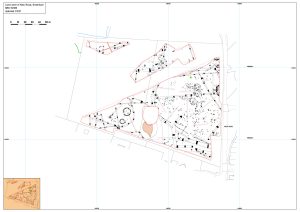 Above: The current excavation plan.

While it was difficult to discern patterns within the postholes at first, patterns started to form when they were excavated and planned. Multiple roundhouses, one of which has a double ring of postholes and large entrance postholes, were seen with other possible roundhouses suspected from arcs of postholes. To the west of the site the postholes peter out and there is another enclosure with two ring gullies and associated pits and postholes. This may be a continuation of the settlement or a later settlement on he same land, but that won’t be known until the post-excavation process has been completed.

While there is a clear ring gully and clear posthole built roundhouses a transitional state between the two can be seen. These roundhouses have associated segmented ring gullies around the postholes. Further sections of curved gully can be seen nearby too. These features suggest a continuation of occupation on the site which moved from Bronze Age to the East of the site and Iron Age to the west of the site.

Aerial photography and historic excavations in and around the common to the south of the site have show remains of what look to be Bronze Age occupation of the Area. The site is near the area of these identified monuments and could be part of the wider Bronze Age landscape in the area. 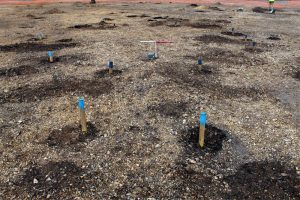 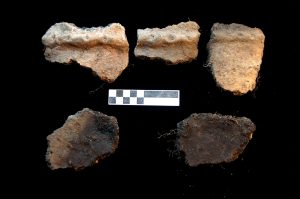 Above left: The first roundhouse. Above right: Prehistoric pottery recovered from postholes.

The prehistoric pottery pictured above was recovered from a posthole in the largest roundhouse. This roundhouse was constructed with a double ring of postholes suggesting a substantial building. This is supported by the entrance postholes which are of a significant size at over half a metre deep and nearly a metre wide.

Postholes and ditches are not the only features uncovered. A single, heavily degraded, burial was uncovered near the largest enclosure ditch. The remains were curled around a flagon of Roman date suggesting that the site was in use into the 1st century AD. This may be connected to the Iron AGe evidence to the west of the site and it’s location near he large enclosure ditch may be coincidental. 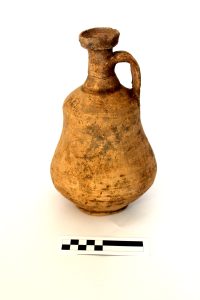 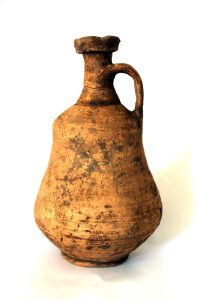 Above: The pot from the burial.